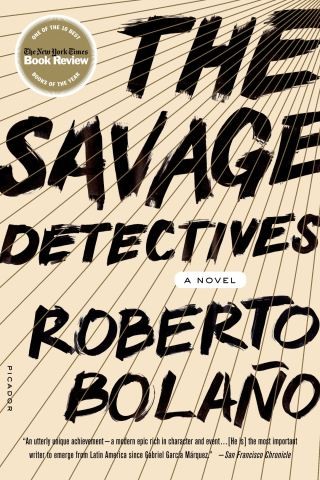 The Savage Detectives is an exuberant, raunchy, wildly inventive, and ambitious novel from one of the greatest Latin American authors of our age.

New Year's Eve, 1975: Arturo Belano and Ulises Lima, founders of the visceral realist movement in poetry, leave Mexico City in a borrowed white Impala. Their quest: to track down the obscure, vanished poet Cesárea Tinajero. A violent showdown in the Sonora desert turns search to flight; twenty years later Belano and Lima are still on the run.

The explosive first long work by "the most exciting writer to come from south of the Rio Grande in a long time" (Ilan Stavans, Los Angeles Times), The Savage Detectives follows Belano and Lima through the eyes of the people whose paths they cross in Central America, Europe, Israel, and West Africa. This chorus includes the muses of visceral realism, the beautiful Font sisters; their father, an architect interned in a Mexico City asylum; a sensitive young follower of Octavio Paz; a foul-mouthed American graduate student; a French girl with a taste for the Marquis de Sade; the great-granddaughter of Leon Trotsky; a Chilean stowaway with a mystical gift for numbers; the anorexic heiress to a Mexican underwear empire; an Argentinian photojournalist in Angola; and assorted hangers-on, detractors, critics, lovers, employers, vagabonds, real-life literary figures, and random acquaintances.

A polymathic descendant of Borges and Pynchon, Roberto Bolaño traces the hidden connection between literature and violence in a world where national boundaries are fluid and death lurks in the shadow of the avant-garde. The Savage Detectives is a dazzling original, the first great Latin American novel of the twenty-first century.

Roberto Bolaño: Roberto Bolaño was born in Santiago, Chile, in 1953. He grew up in Chile and Mexico City, where he was a founder of the Infrarealist poetry movement. His first full-length novel, The Savage Detectives, received the Herralde Prize and the Rómulo Gallegos Prize when it appeared in 1998. Roberto Bolaño died in Blanes, Spain, at the age of fifty.

Born in Chile in 1953, Roberto Bolaño fled to Mexico after the military government took power in the late 1960s. There he helped found the infrarealist movement. He later settled with his wife and children in northern Spain, where he died in 2003. He received all of that country's highest literary awards, including the Romulo Gallegos Prize for The Savage Detectives. In 2004 he was honored by the First Conference of Latin American Authors as "the most important literary discovery of our time."