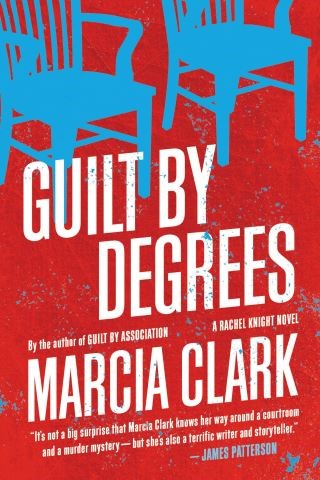 Harrowing, smart, and riotously entertaining, Guilt by Degrees is a thrilling ride through the world of LA courts with the unforgettable Rachel Knight.

Someone has been watching D.A. Rachel Knight -- someone who's Rachel's equal in brains, but with more malicious intentions. It began when a near-impossible case fell into Rachel's lap, the suspectless homicide of a homeless man. In the face of courthouse backbiting and a gauzy web of clues, Rachel is determined to deliver justice. She's got back-up: tough-as-nails Detective Bailey Keller.

As Rachel and Bailey stir things up, they're shocked to uncover a connection with the vicious murder of an LAPD cop a year earlier. Something tells Rachel someone knows the truth, someone who'd kill to keep it secret.

Marcia Clark:
Marcia Clark began practicing law as a criminal defense attorney. She became a prosecutor in the L.A. District Attorney's Office in 1981, and spent ten years in the Special Trials Unit where she handled a number of high profile cases prior to the O.J. Simpson case, including the prosecution of stalker/murderer Robert Bardo.

In May of 1997, her book on the Simpson case, Without a Doubt, was published and quickly rose to #1 on the New York Times, Wall Street Journal, Washington Post, LA Times, and Publisher's Weekly bestsellers lists.

Marcia has published three novels which feature Los Angeles Special Trials prosecutor Rachel Knight: Guilt by Association, Guilt by Degrees, and Killer Ambition. TNT has optioned the books for a drama series. Marcia is attached as an executive producer.