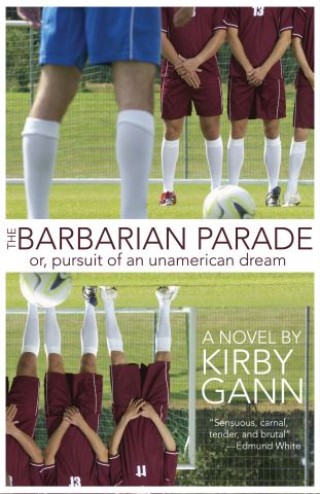 The Barbarian Parade, or Pursuit of an Unamerican Dream

A novel brutal in its honesty, a harrowing critique of American masculinity, and a loving portrayal of family disfunction: The Barbarian Parade is the story of Gabriel Toure, a “ne’er-do-well who only means well” and a Kentucky boy who believes he’s grown up fast, until the day comes when he recognizes he has everything still to learn. As a child Gaby idolizes his father, “Smilin’" Ray, a man who might have stepped out of a song by Waylon Jennings or Johnny Cash, a teller of tall tales who regales his youngest son with promises of all that awaits him out in the world. His sensible mother Olive does her best to raise both her boys right, but when Ray gets himself sent to prison and she has to support the family alone, Gaby is left to navigate adolescence on his own. A natural athlete, he discovers the soccer field provides him with particular solace and fulfillment and he dedicates himself to excelling there. Yet success in athletics and the culture of the locker room invites many off-field temptations as well, and Gaby possesses the same wild streak his father claims runs through all the Toure men; soon he finds even the most loving mother has her limits. Thus begins a long and roaming odyssey, one that—like all such journeys—ultimately leads back to home, where Gabriel must come to terms with a family in disarray and a life that has veered off-course. Described as being part The Adventures of Augie March and part Bull Durham, The Barbarian Parade presents a unique coming-of-age tale in an America where boys are rewarded for not growing up; an America plagued with many dark realities, yet dizzy, like Gabriel himself, with a sense of unlimited possibility.

Kirby Gann: Kirby Gann is the author of the novel Ghosting, which was included in the Best of Year lists from Publishers Weekly, Shelf Awareness, and flavorpill.com, and was a finalist for the Kentucky Book of the Year; an earlier novel, Our Napoleon in Rags, was also a finalist for the Kentucky Book of the Year. He is the series editor of Bookmarked on behalf of Ig Publishing, and contributed the first title in that series: Bookmarked: John Knowles’ A Separate Peace. He is a freelance editor and writing mentor and is on the faculty in the low-residency MFA in Writing Program at Spalding University. Gann and his wife Stephanie, a horticulturist, live with an ever-changing pack of dogs outside of Louisville, Kentucky. The Barbarian Parade was his first novel, originally published in 2004.