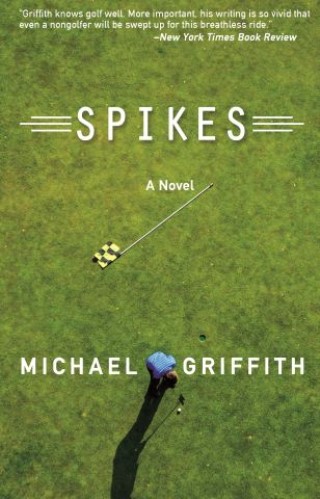 At twenty-six, Brian Schwan is washed up. Four years hacking away on third-rate golf courses across the South have produced a grand total of $19,000 in earnings, zero wins, and a string of spectacular tournament flame-outs. He’s just shot a horrendous opening round, his wife wants him to come home and start a family, and even his father, who dreamed of seeing his son a star golfer, seems to have given up on his game. Critically acclaimed, Spikes is a sharply observed novel about the obscurity of our motivations, our capacity for self-delusion, and the surprising, unexpected possibilities for grace.

Michael Griffith: Michael Griffith’s most recent novel, Trophy (Triquarterly), was named one of Kirkus Reviews’ Best 25 Books of Fiction for 2011. His previous books are Bibliophilia (2003) and Spikes (2001), both from Arcade. Griffith’s fiction and nonfiction have appeared in Virginia Quarterly Review, Ninth Letter, Salmagundi, Oxford American, New England Review, Shenandoah, Ninth Letter, Southwest Review, Five Points, Blackbird, The Washington Post, Chicago Quarterly Review, and other periodicals, and he is the recipient of fellowships from the National Endowment for the Arts and the Louisiana Division of the Arts, among others. He is a former winner of the Cleanth Brooks Prize for Nonfiction (judged by Patricia Hampl). A native of Orangeburg , SC , Griffith earned an AB in Germanic Languages and Literatures from Princeton (summa cum laude) in 1987 and an MFA in Creative Writing from LSU (1992). From 1992 to 2002 he served as the Associate Editor of The Southern Review. He is now Professor of English and Director of Graduate Studies in English at the University of Cincinnati, and he teaches in the Sewanee School of Letters as well. In 2004 he became founding editor of Yellow Shoe Fiction, an original-fiction series from LSU Press, and he is Fiction Editor at Cincinnati Review. Griffith has been at UC since 2002. A recipient of the English department’s Boyce Award for Teaching and of the university’s Outstanding Doctoral Mentoring Award, he was named a Fellow of the Graduate School in 2013.