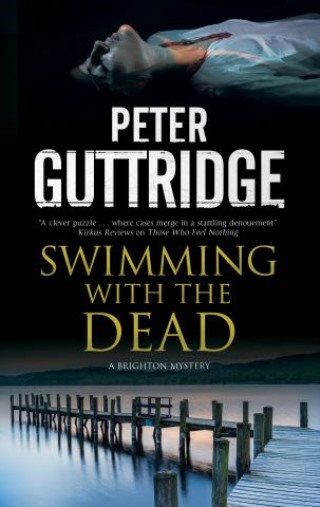 Swimming with the Dead

With an art deco lido under threat of closure by a ruthless property developer, the Save the Salthaven Lido campaigners are fighting a desperate battle to keep it open. When the lead campaigner is discovered dead, suspicion falls on the developers.

No sooner have DI Sarah Gilchrist and DS Bellamy Heap begun to investigate that there is a second death during a pre-qualifying event in Brighton Bay for potential Cross-Channel swimmers. This time it’s a local millionaire businesswoman with radical plans to reorganise the family business.

When another endurance swimmer dies during an event with links to the property developer, Gilchrist and Heap flounder. Are all the deaths connected to the Salthaven development? Is someone targeting open-water swimmers? Gilchrist and Heap race to uncover the truth before more victims come to the surface.

Peter Guttridge: Award-winning comic crime author Peter Guttridge turned from the Daft Side to the Dark Side for his Brighton mystery series, which started with the City of Dreadful Night and with the last in the series being 2014’s Those Who Feel Nothing. He was also the Observer's crime fiction critic for twelve years, meaning he’s read far more crime fiction than is good for him.