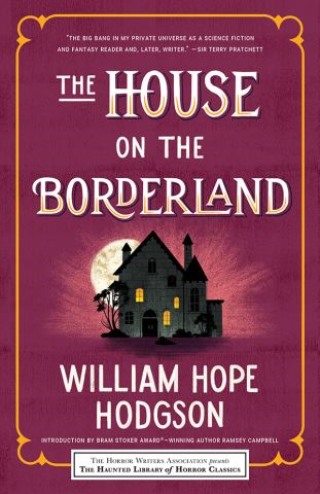 The House on the Borderland

Fishing buddies Tonnison and Berreggnog didn't bargain for what they found while on holiday near the remote Irish village of Kraighten. While walking along the riverbank, they're astonished to see that the river abruptly ends. It reappears as a surge from a chasm some 100 feet below the edge of an abyss, where also stand the remains of an oddly shaped house, half-swallowed by the pit.

Exploring the ruins, the friends discover the moldering journal of an unidentified man—the Recluse—who had lived in the house with his sister and faithful dog years ago. Its pages reveal the man's apparent descent into madness—how else to account for his chronicles of otherworldly visions, trips to other dimensions, and attacks by swine-like humanoid creatures that seem to have followed him home? After one particular vision in which he witnesses the end of the earth and time itself, the Recluse awakens in his study to find nothing has changed—except that his dog Pepper is dead, dissolved into a pile of dust. And then the "swine things" return...

Praised by H. P. Lovecraft as one of the most influential works of "cosmic horror," William Hope Hodgson's 1908 masterpiece The House on the Borderland broke free of the Gothic horror conventions of the day with its eerie mix of sci-fi, fantasy, and supernatural elements. Terry Pratchett called it "the Big Bang in my private universe," and modern horror master Ramsey Campbell, in his introduction to this volume, hails the book as "an enduring classic of cosmic terror."