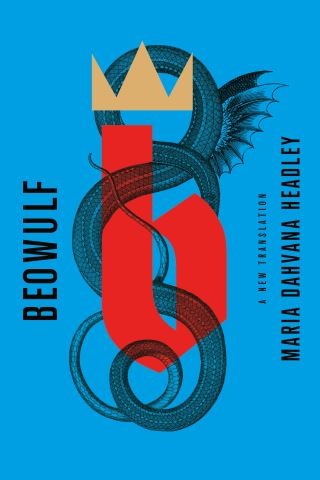 Picked for Kirkus Reviews’ Best Fiction in Translation of 2020. Named a Book of the Year by NPR The New Statesman.
Picked for Loyalty Books’ Holiday List.
A new, feminist translation of Beowulf by the author of the much-buzzed-about novel The Mere Wife

"Brash and belligerent, lunatic and envigorating, with passages of sublime poetry punctuated by obscenities and social-media shorthand." --Ruth Franklin, The New Yorker

"The author of the crazy-cool Beowulf-inspired novel The Mere Wife tackles the Old English epic poem with a fierce new feminist translation that radically recontextualizes the tale."--Barbara VanDenburgh, USA Today

Nearly twenty years after Seamus Heaney’s translation of Beowulf—and fifty years after the translation that continues to torment high-school students around the world—there is a radical new verse translation of the epic poem by Maria Dahvana Headley, which brings to light elements that have never before been translated into English, recontextualizing the binary narrative of monsters and heroes into a tale in which the two categories often entwine, justice is rarely served, and dragons live among us.

A man seeks to prove himself as a hero. A monster seeks silence in his territory. A warrior seeks to avenge her murdered son. A dragon ends it all. The familiar elements of the epic poem are seen with a novelist’s eye toward gender, genre, and history—Beowulf has always been a tale of entitlement and encroachment, powerful men seeking to become more powerful, and one woman seeking justice for her child, but this version brings new context to an old story. While crafting her contemporary adaptation of Beowulf, Headley unearthed significant shifts lost over centuries of translation.

Maria Dahvana Headley: Maria Dahvana Headley is a #1 New York Times-bestselling author and editor. Her novels include Magonia, Aerie, and Queen of Kings, and she has also written a memoir, The Year of Yes. With Kat Howard, she is the author of The End of the Sentence, and with Neil Gaiman, she is co-editor of Unnatural Creatures. Her short stories have been shortlisted for the Shirley Jackson, Nebula, and World Fantasy Awards, and her work has been supported by the MacDowell Colony and by Arte Studio Ginestrelle, where the first draft of The Mere Wife was written. She was raised with a wolf and a pack of sled dogs in the high desert of rural Idaho, and now lives in Brooklyn.