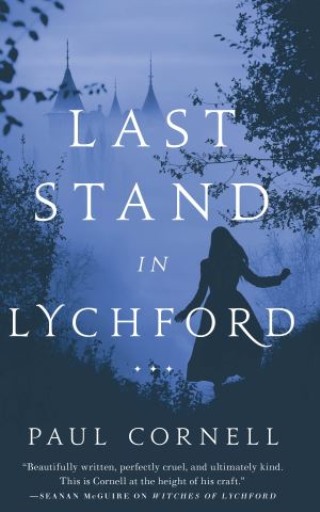 Celestial beings and human witches clash for the future of the human and fairy worlds in Paul Cornell's Last Stand in Lychford.

There are changes in the air, both in Lychford and in the land of fairy.

The magical protections previously employed by the town are gone, and the forces of darkness are closing in – both figuratively and literally.

Can Autumn and Lizzie save their community, and... well, the world...?

Exploding fairies, the architect of the universe and a celestial bureaucratic blunder make this a satisfying conclusion to the ever-popular Witches of Lychford series.

Paul Cornell: Paul Cornell has written episodes of Elementary, Doctor Who, Primeval, Robin Hood and many other TV series, including his own children’s show, Wavelength. He’s worked for every major comics company, including his creator-owned series Saucer State for IDW and This Damned Band for Dark Horse, and runs for Marvel and DC on Batman and Robin, Wolverine and Young Avengers. He’s the writer of the Lychford rural fantasy novellas from Tor.com Publishing. He’s won the BSFA Award for his short fiction, an Eagle Award for his comics, a Hugo Award for his podcast and shares in a Writer’s Guild Award for his Doctor Who. He’s the co-host of Hammer House of Podcast.