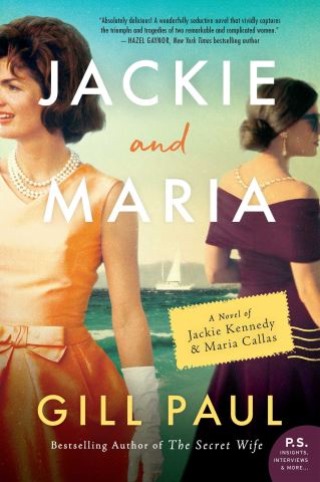 From the #1 bestselling author of The Secret Wife comes a story of love, passion, and tragedy as the lives of Jackie Kennedy and Maria Callas are intertwined—and they become the ultimate rivals, in love with the same man.

The President's Wife; a Glamorous Superstar; the rivalry that shook the world...

Jackie Kennedy was beautiful, sophisticated, and contemplating leaving her ambitious young senator husband. Life in the public eye with an overly ambitious--and unfaithful—man who could hardly be coaxed to return from a vacation after the birth of a stillborn child was breaking her spirit. So when she's offered a holiday on the luxurious yacht owned by billionaire Ari Onassis, she says yes...to a meeting that will ultimately change her life.

Maria Callas is at the height of her operatic career and widely considered to be the finest soprano in the world. And then she's introduced to Aristotle Onassis, the world’s richest man and her fellow Greek. Stuck in a childless, sexless marriage, and with pressures on all sides from opera house managers and a hostile press, she finds her life being turned upside down by this hyper-intelligent and impeccably charming man...

Little by little, Maria’s and Jackie’s lives begin to overlap, and they come closer and closer until everything they know about the world changes on a dime.

Gill Paul is an author of historical fiction, specialising in relatively recent history. She has written two novels about the last Russian royal family: The Secret Wife, published in 2016, which tells the story of cavalry officer Dmitri Malama and Grand Duchess Tatiana, the second daughter of Russia’s last tsar; and The Lost Daughter, published in October 2018, that tells of the attachment Grand Duchess Maria formed with a guard in the house in Ekaterinburg where the family was held from April to July 1918.

Gill’s other novels include Another Woman’s Husband, about links you may not have been aware of between Wallis Simpson, later Duchess of Windsor, and Diana, Princess of Wales; Women and Children First, about a young steward who works on the Titanic; The Affair, set in Rome in 1961–62 as Elizabeth Taylor and Richard Burton fall in love while making Cleopatra; and No Place for a Lady, about two Victorian sisters who travel out to the Crimean War of 1854–56 and face challenges beyond anything they could have imagined.