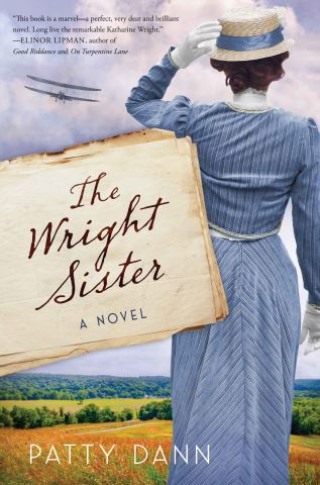 An epistolary novel of historical fiction that imagines the life of Katharine Wright and her relationship with her famous brothers, Wilbur and Orville Wright.

On December 17, 1903, Orville and Wilbur Wright flew the world’s first airplane at Kitty Hawk, North Carolina, establishing the Wright Brothers as world-renowned pioneers of flight. Known to far fewer people was their whip-smart and well-educated sister Katharine, a suffragette and early feminist.

After Wilbur passed away, Katharine lived with and took care of her increasingly reclusive brother Orville, who often turned to his more confident and supportive sister to help him through fame and fortune. But when Katharine became engaged to their mutual friend, Harry Haskell, Orville felt abandoned and betrayed. He smashed a pitcher of flowers against a wall and refused to attend the wedding or speak to Katharine or Harry. As the years went on, the siblings grew further and further apart.

In The Wright Sister, Patty Dann wonderfully imagines the blossoming of Katharine, revealed in her “Marriage Diary”—in which she emerges as a frank, vibrant, intellectually and socially engaged, sexually active woman coming into her own—and her one-sided correspondence with her estranged brother as she hopes to repair their fractured relationship. Even though she pictures “Orv” throwing her letters away, Katharine cannot contain her joie de vivre, her love of married life, her strong advocacy of the suffragette cause, or her abiding affection for her stubborn sibling as she fondly recalls their shared life.

An inspiring and poignant chronicle of feminism, family, and forgiveness, The Wright Sister is an unforgettable portrait of a woman, a sister of inventors, who found a way to reinvent herself.

Patty Dann's novels have been translated into French, German, Italian, Portuguese, Dutch, Chinese, Korean, and Japanese. Her novel Mermaids was made into a movie starring Cher, Winona Ryder, and Christina Ricci. Dann is also the author of The Butterfly Hours: Transforming Memories into Memoir, The Goldfish Went on Vacation: A Memoir of Loss, and The Baby Boat: A Memoir of Adoption. Dann's articles have appeared in the New York Times, Boston Globe, O, The Oprah Magazine, and numerous other publications. She teaches writing workshops at the West Side YMCA in New York. Dann is married to journalist Michael Hill and has one son and two stepsons.