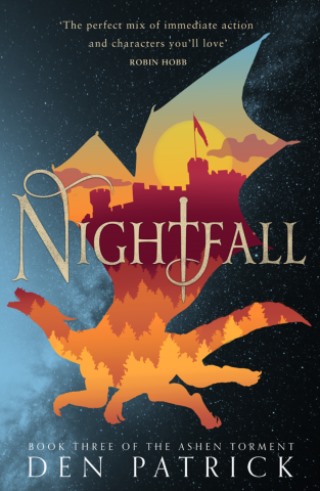 The sky is filled with dragons: the people are ready to burn the regime to the ground.
The seas churn with monsters and the tide is changing: revolution is coming.
Steiner has at last realised the part he will play in this fight.
Kimi knows now what it is to lead, but must learn to overcome differences if she is to unite and defeat the dragon factions.
Silverdust inches towards a final revenge.
Across the ocean, Kjellrun feels the call of war. But she must reconcile her new responsibilities to the people of the temple with the urge to find her family.
Leaders, all – and all are desperate. For the Emperor will not give up easily. He will rule – and he cares not if his subjects are alive… or if they are dead.
Worlds and outlooks collide, wars begin and lives will end in this spectacular finale by a new master in the fantasy genre. The stakes have never been higher in the roaring conclusion to the beloved Ashen Torment series.

DEN PATRICK is the author of the Erebus Sequence, published in 2014, and was nominated for the British Fantasy Society Award for Best Newcomer in 2015. WITCHSIGN is the first of three books in The Ashen Torment series. He lives in London with his wife and their two cats.