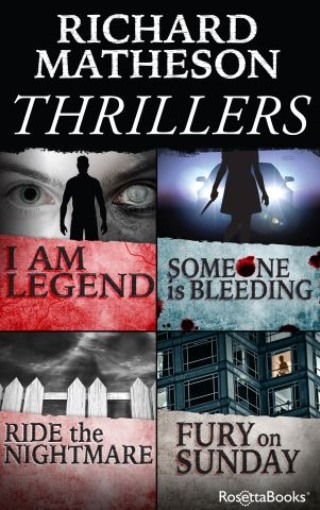 I Am Legend, Someone is Bleeding, Ride the Nightmare, Fury on Sunday

Four classic novels of murder, madness, revenge, and survival by “one of the great names in American terror fiction” (Philadelphia Inquirer).

I Am Legend
Named the best vampire novel of the century by the Bram Stoker Estate, I Am Legend is the story of the last man to survive a pandemic that turned the rest of humanity into blood-sucking monsters.

Someone Is Bleeding
In Matheson’s debut novel, a young novelist falls for a beautiful woman who is involved with a shady lawyer. But the love triangle turns dangerous when corpses begin to pile up in the woman’s wake.

Ride the Nightmare
A family man saving up for larger home, Chris Martin lives a conventional life—until a secret from his past invades his home, threatening everything he has built.

Fury on Sunday
A lunatic pianist escapes from an insane asylum one Sunday morning and spends the next four hours on a revenge-fueled rampage to find his erstwhile manager and his lover’s new husband.