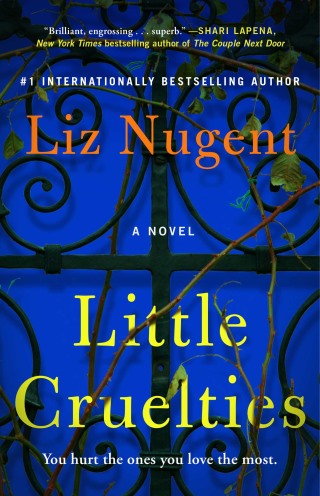 Hailed by New York Times bestselling author Lisa Jewell as “a force to be reckoned with,” Liz Nugent is back with a powerful and unsettling new novel that will invite comparison to the bitter relationships in HBO’s blockbuster series Succession, as it follows three brothers, bound by blood but split by fate, and delves into the many ways families can wreak emotional havoc across generations.

All three of the Drumm brothers were at the funeral.

But only one of them was in the coffin.

William, Brian, and Luke: three boys, born a year apart, trained from birth by their wily mother to compete for her attention. They play games, as brothers do…yet even after the Drumms escape into the world beyond their windows, those games—those little cruelties—grow more sinister, more merciless, and more dangerous. And with their lives entwined like the strands of a noose, only two of the brothers will survive.

Crisply written and quickly paced, perfect for fans of breathtaking suspense, Little Cruelties gazes unflinchingly into the darkness: the darkness collecting in the corners of childhood homes, hiding beneath marriage beds, clasped in the palms of two brothers shaking hands. And it confirms Liz Nugent—whose work has invited comparisons to Patricia Highsmith and Barbara Vine and has been celebrated as "captivating" (People) and "highly entertaining" (The Washington Post)—as one of the most exciting, perceptive voices in contemporary fiction.

Liz Nugent: Liz Nugent has worked in Irish film, theater, and television for most of her adult life. She is an award-winning writer of radio and television drama and has written critically acclaimed short stories both for children and adults, as well as the bestselling novels Unraveling Oliver and Lying in Wait. She lives in Dublin. Visit her at LizNugent.ie or follow her on Twitter at @Lizzienugent.