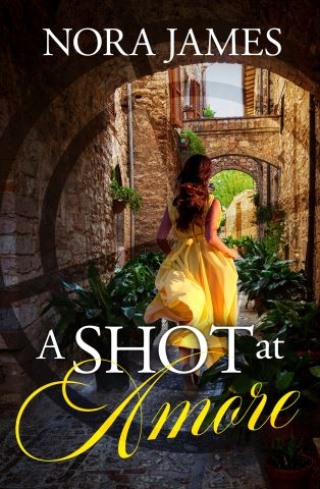 A Shot at Amore

Second chance love has never been so alluring ... or dangerous.

When Sofia returns to the small town of Sant'Agosto in Central Italy to take care of her sick aunt, she doesn't expect to find Antonio, her childhood sweetheart, there. He's back from Rome, has turned into the sexiest man alive - and he carries a gun. That's because, as Vice-Commander of a special operations group, he fights the Mafia on a daily basis.

Can Antonio be trusted with Sofia's heart? Or will he disappoint her as he did when they were teens?

For Antonio, the situation is even more fraught: should he push Sofia away to protect her from his dangerous world, or let her love him although it could cost her life?

'A sweet, second chance story taking place set against a backdrop of Italy so colorfully described that it felt like I was there in person. In conclusion, I HIGHLY RECOMMEND!' Goodreads Review

Nora James grew up in Australia, before spending several years in Paris where she studied, worked and met the Frenchman who would soon become her husband. In her mid-twenties she returned to Western Australia with her spouse, read law at UWA and travelled extensively through her employment as an international resources lawyer and translator.

In 2016 she and her husband returned to France. She now writes novels from the home in coastal Brittany that the couple share with their daughter and a menagerie of furry friends.

When Nora's not dreaming up stories she can be found in the garden growing vegetables, in the kitchen cooking up a storm or on the couch reading a good book.