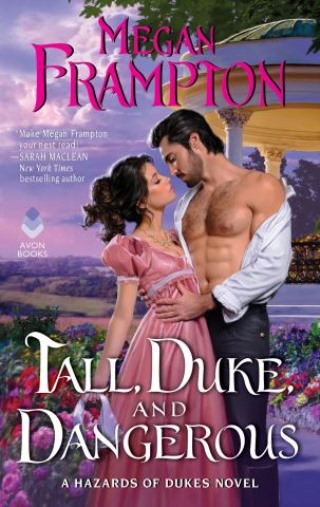 A Hazards of Dukes Novel

Megan Frampton returns with the second book in the Hazards of Dukes series, a series that made Sarah MacLean say "Make Megan Frampton your next read!"

He needs a bride…

Nash, the “dangerous” Duke of Malvern, has always bristled against the rules of English society. Hot tempered and fearful of becoming like his brutish late father, he lives a life of too much responsibility and too little joy. And although he’s vowed to never marry, a duke has a duty—and there’s only one way to get himself an heir and a spare. So Nash reluctantly takes a look around at society’s available young ladies to see who might be willing to put up with his one-word answers and frequent glowers.

She longs for love…

After the death of her father and wicked stepmother, Ana Maria goes from virtual servant to lady-in-training, and while society life has its benefits—gorgeous gowns!—its restrictive rules stifle her sprit. And when her independent actions put her in danger, her half-brother insists Nash teach her some self-defense. While most of London’s ladies find Nash intimidating, she only sees a man who needs introducing to all the joys life has to offer. So although officially they are coming together for fighting lessons, unofficially their physical contact begins to blur the line between friendship and begins to grown into something more…

Megan Frampton writes historical romance under her own name and romantic women’s fiction as Megan Caldwell. She likes the color black, gin, dark-haired British men, and huge earrings, not in that order. She lives in Brooklyn, New York, with her husband and kid.