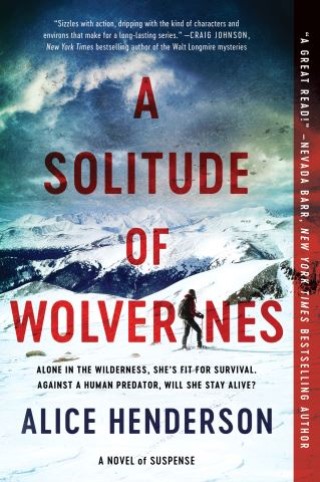 A Solitude of Wolverines

A Novel of Suspense

“Both a mystery and a survival story, here is a novel written with a naturalist’s eye for detail and an unrelenting pace. It reminded me of the best of Nevada Barr." —James Rollins, #1 New York Times bestselling author of The Last Odyssey

The first book in a thrilling series featuring an intrepid wildlife biologist who's dedicated to saving endangered species...and relies on her superior survival skills to thwart those who aim to stop her.

While studying wolverines on a wildlife sanctuary in Montana, biologist Alex Carter is run off the road and threatened by locals determined to force her off the land.

Undeterred in her mission to help save this threatened species, Alex tracks wolverines on foot and by cameras positioned in remote regions of the preserve. But when she reviews the photos, she discovers disturbing images of an animal of a different kind: a severely injured man seemingly lost and wandering in the wilds.

After searches for the unknown man come up empty, local law enforcement is strangely set on dismissing the case altogether, raising Alex’s suspicions. Then another invasive predator trespasses onto the preserve. The hunter turns out to be another human—and the prey is the wildlife biologist herself. Alex realizes too late that she has seen too much—she's stumbled onto a far-reaching illegal operation and now has become the biggest threat.

In this wild and dangerous landscape, Alex’s life depends on staying one step ahead—using all she knows about the animal world and what it takes to win the brutal battle for survival.

In addition to being a writer, Alice Henderson is a wildlife sanctuary monitor, geographic information systems specialist, and bioacoustician. She documents wildlife on specialized recording equipment, checks remote cameras, creates maps, and undertakes wildlife surveys to determine what species are present on preserves, while ensuring there are no signs of poaching. She’s surveyed for the presence of grizzlies, wolves, wolverines, jaguars, endangered bats, and more.