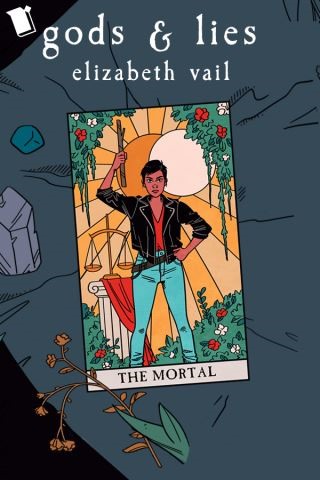 A priestess of justice and a disgraced demigod investigate a grisly murder that threatens the throw the uneasy balance between gods and mortals into chaos. Gods make everything complicated. No one knows that better than Justix Iris Tharro, a human agent of the Goddess of Justice, still reeling from a scandal that almost ended her career. Grateful for a second chance, Iris’ mandate is clear: investigate crimes, mete out justice…and never again insert herself in the business of the Pantheon. But when the dead body of a young woman is found on the altar in the wind god’s temple, iris quickly realizes her task might not be that simple. Because while murder is usually a human crime, this one is rife with magic only a God would be capable of. To accuse a God of murdering a human acolyte would do more than ruin Iris’ reputation (again); it could put her life at risk. That’s why she needs a partner who knows the good, the bad, and the ugly consequences of dealing with the Gods. Enter Andy: a handsome demigod with a silver tongue, desperately trying to win back the favor of his sea goddess mother. It’s a challenging partnership, but there’s no one better to guide iris through black markets teeming with illegal relics, nightclubs full of nymphs, and the nefarious politics of the Pantheon . . . especially when it becomes clean that more than one immortal may have something to hide. In a world where ancient grudges and human desires live side by side and the old ways die hard, Iris and Andy are confronted with an impossible choice: whether solving one human’s murder is worth the wrath of all the Gods. This fun, fast-paced fantasy noir novel by Elizabeth Vail is perfect for fans of American Gods and The Maltese Falcon, and was originally published on Serial Box (serialbox.com).